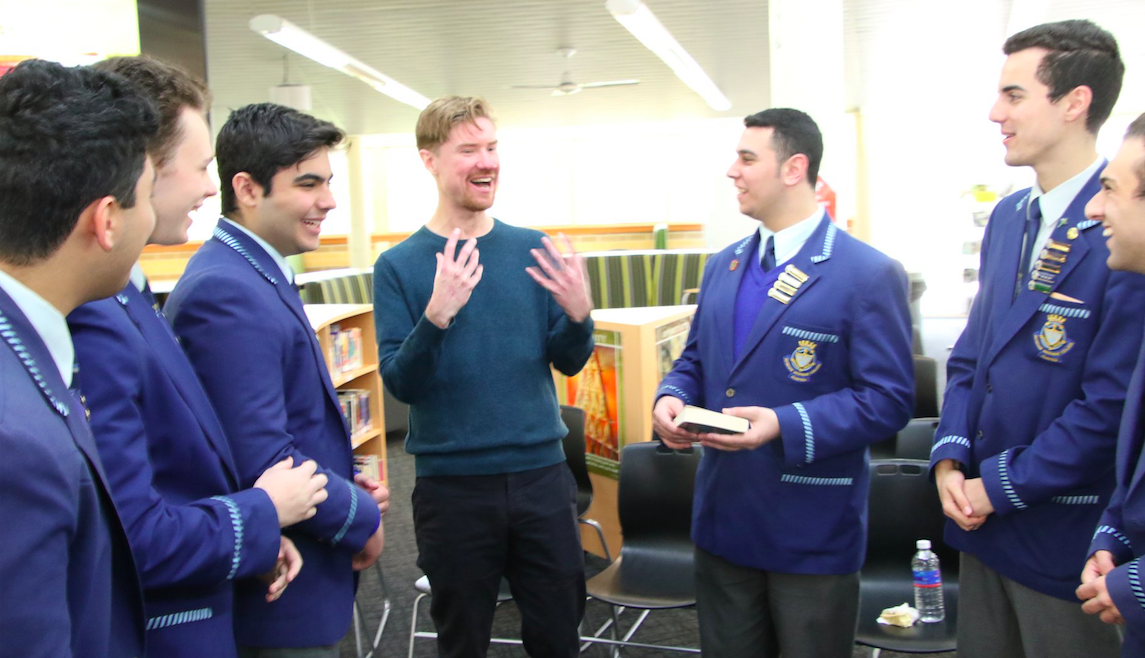 On the 28th of August 2019 I was invited to address the whole school assembly at Patrician Brothers’ College in Fairfield. It was an honour to visit this tremendous school and meet so many students and teachers.

After addressing the assembly I was invited to a special Book Week morning tea in the library and then conducted a workshop for Year 10 students on the subject of North Korean propaganda. Truly, a rich and fulfilling day in the life of this author!

Below are my remarks to the school assembly:

From the moment we developed speech we have told tales. From the ancient legends of our ancestors to the stories shared on social media today, we use tales to make sense of our lives and place in the world. Once upon a time we called them myths. These stories rose wherever people dwelled. These myths made meaning of the seasons and the tides, the rising and the falling of the sun. Most importantly, they made sense of us: of where we came from, where we are going, and what we might become. Many of these stories, including some told hundreds or even thousands of years ago, are with us still. They take new shapes and forms in every age. They fill our comic books and movie screens, as well as our poems and novels and plays. They live on in our dreams.

I used to think of storytellers as powerful magicians. As a child I looked on them in awe. In a way, writing is a kind of magic. Writers use words to conjure powerful illusions or to reveal hidden truths. Of course, it’s in my interest to maintain the illusion that we are wizards. Writers love to surround themselves with mystery. But the truth is more wonderful than magic: for we are all storytellers. The only difference between a tale shared between two friends on the way to school and a published story written for an audience is craft. Or, put another way, practice. If you can think, you can speak. If you can speak, you can write. Writing is just redrafted thought. And all our minds are full of thoughts. The secret to being a writer, then, is simple: keep an open heart, try new things, surprise, and challenge yourself. In the end, it may not make you a great writer, but it will make you a better writer. And, as an added bonus, you will have lived a life that you will savour and remember.

Many of my earliest memories are of stories. I was a voracious reader and adored The Hobbit and The Chronicles of Narnia and The Wind in the Willows and many other classic children’s books. I was often sick as a child and once viciously attacked by a teenager when I was small. At times I felt anxious and afraid. Like millions of other children I hoped there would be a new world hidden inside a wardrobe. I dreamed that a TARDIS might take me away to other times and places. The characters in books became my friends; their images became the movie of my dreams. The best stories for young people become wired into our flesh like DNA. Let’s be honest, there are few books for adults that will ever have so great an impact on humanity as The Very Hungry Caterpillar.

Our stories can be served up in so many different flavours: in novels, poems, graphic novels, films, and plays. Like the Very Hungry Caterpillar, eat them all and see what you become! When I was a child, many of my favourite tales were not written down at all. My grandmother lived to be one hundred and three years old. Alice grew up poor in the East End of London, so old that she could recall the German Air Force dropping bombs from hot air balloons during World War One. As she grew more ancient, Alice’s memories did not exactly fade, but they did distort into ever more amazing fantasy and fiction. Grandma would tell anyone who cared to listen that she was hiding in the bunker when “Old Adolf” – as she called Hitler – died at the end of World War Two. The stranger grandma’s tales became, the more I was enchanted. My sister and my cousins felt the same. Alice was a living library. All of us are, in fact. Every person here today is a collection of tales. Some are true, some half true, and some are tales in which it’s hard to know the difference because we don’t really know ourselves.

A natural storyteller, Grandma rarely told the same story twice in the same way. Perhaps you have someone in your family who is a gifted storyteller like her. I especially loved when Grandma told a famous fairy tale like The Three Little Pigs or Red Riding Hood, because it was always wilder and stranger than the official version. Grandma just made it up as she went along. I never knew what would become of Red Riding Hood from one version to the next and was desperate to find out. That’s one thing all good stories have in common, isn’t it? They leave us wanting to know what happens next. Just one more chapter before I go to bed! Just one more.

Grandma did not much like the company of adults and preferred to play games of make-believe and dress-ups with her grandchildren. Together we would create whole worlds and fill them with different versions of ourselves. Playing: just another word for storytelling, as natural to young people as running and jumping in the park, laughing with our friends until we cry, daydreaming, telling tall tales, and sometimes even lies.

How quickly we forget that power!

To be a writer is to listen to that voice again and start to take dictation.

My father loved books too, but was not a fan of fiction. I found that strange, as he was an Anglican minister and fine preacher. After all, Jesus taught with parables. He told tales to reveal the truth. Christ was, as Oscar Wilde once said, a poet. My father did not object to my obsession with fantasy and science fiction, he just did not see the point. I’ll never forget him snoring at the movies during The Fellowship of the Ring. To each their own, but I think my father missed something important there.

You see, J.R.R. Tolkien, like his dear friend C.S. Lewis, was a veteran of the First World War. Both had seen the worst of humanity firsthand in the trenches of the Sommes, as well as bravery and sacrifice and love. And so, in their fantastic tales of Middle-earth and Narnia these writers asked the deepest of all questions: about love and death and war, faith and family and friendship. Paraphrasing Chesterton, Neil Gaiman wrote: “Fairy tales are more than true: not because they tell us that dragons exist, but because they tell us that dragons can be beaten.” Smaug was never just a dragon, was he? Smaug was – and still is – greed and rage and our all-too-human lust for power. Dark forces with us still.

When it came to writing my own fantastic tale, I wanted to create a new myth too. Whereas Tolkien and Lewis were responding – like my grandmother – to the shock of World War One, I was responding to a post-9/11 world. My tale of pirates and sea monsters and floating cities is a tale of pirates and sea monsters and floating cities, true. But it is also a story of a world at war once more, of the value of courage and heroism and kindness and love in troubled times. It is a story of the need to listen to each other and to hear one another’s stories.

All of us here know the power of words. Sticks and stones may break my bones, but names will never hurt me. We know that it’s not true, don’t we? On the contrary, the names we are called, the words we hear, the stories that surround us, all help shape us and help shape our world. Tales may trap us or may set us free.

In my other life, I am a researcher of children’s lives in North Korea, a country we hear a lot about in the media, and usually for all the wrong reasons. Here is a land where almost every tale is told about one man, the leader of the country, Kim Jong Un. The stories told to children teach all from birth that they must love Kim Jong Un more than their own lives and hate America with equal passion. He is an eater of tales. A destroyer of stories, as well as lives. In a land of 25 million people only one person’s life matters in North Korea … only one story is seen as worth telling.

How lucky we are to be in a school in a city in a land where we can read anything we freely choose to read, and write the stories freely rising from our hearts. How fortunate to have such librarians and teachers and so many books to choose from, so many tales to tell. So let us take the time to read and write and listen. The writer’s journey starts here with all of you.  Thank you.

Tagged with: Book Week, Empire of the Waves, Literature