Christopher RichardsonPosted on 16th July 2016 Posted in Empire of the Waves, General, Literature

Today marks the one year anniversary of the launch of Empire of the Waves: Voyage of the Moon Child. To commemorate the occasion, here are my remarks delivered on that glorious night.

Thank you to all who have made this year unforgettable.

Empire of the Waves: Launch Speech

Before I begin, let me thank those good souls who have made tonight possible. Thank you to Tracy Nathan and Dymocks Sydney for hosting me. After ten years– on and off – as a staff member at Dymocks Burwood from the time I finished high school, it feels especially fine to return “home” for such an event … surrounded by all those unforgettable Dymocks fonts and shades of red! 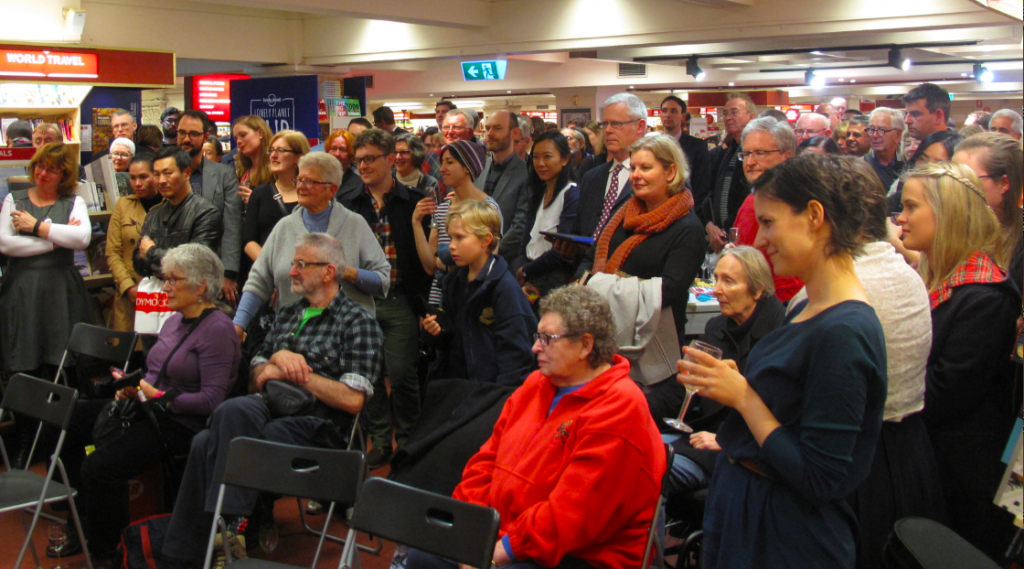 To my mother, my godmother, and my aunts – which all sounds very Hans Andersen, or very P.G. Wodehouse, depending on the type of aunt – thank you for making the champagne, wine and food possible. An extra special thanks to Judy, who has already purchased so many copies of the novel she could open the Christopher Richardson Memorial Library in her living room.

For the sea shanties, I thank my dear friend Robin Dixon, along with Rubi, Libby and Pippa. Together, they are Pelican Daughters. 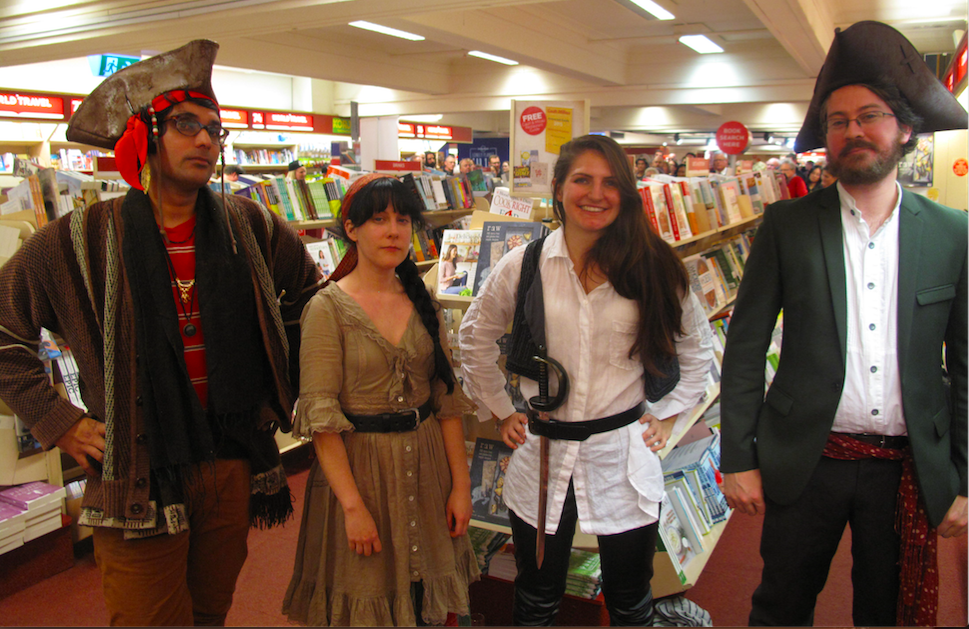 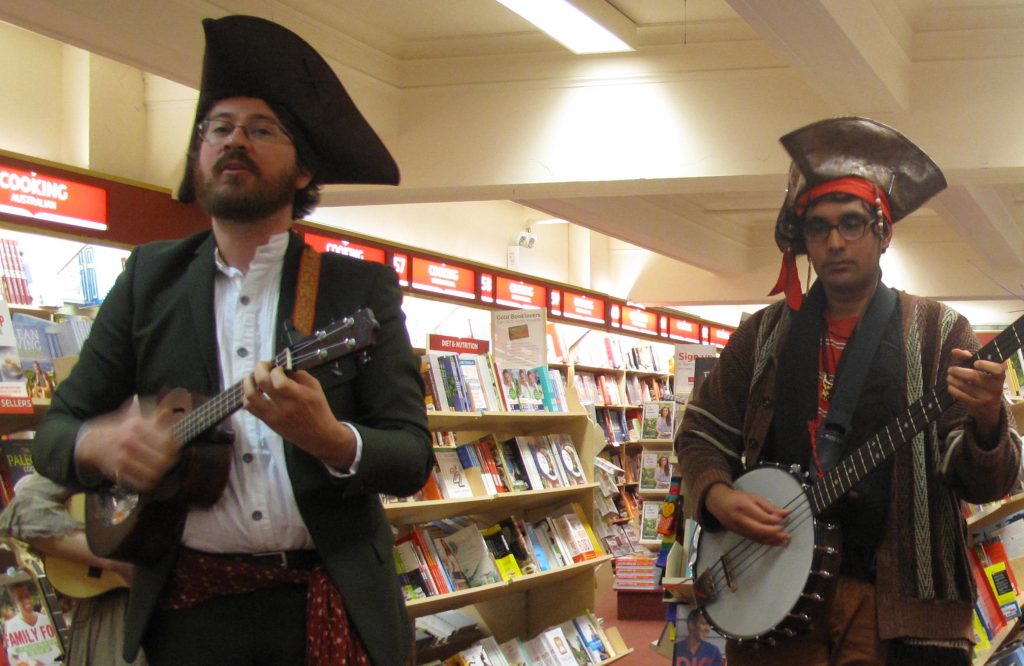 Next, I want to thank all of you for gathering here on this suitably wind and rain-swept evening. I have been blessed to gather so many wonderful friends through each new journey of my life, and to have so many of you here tonight to celebrate delights me. I see here friends from childhood, from primary and high school, from my undergrad and Honours days, from my Masters, my PhD, from church, from my travels, and from many other serendipities.

Providence has been kind to me.

It’s no accident so many of you here are teachers – the most important profession in the world! – and I have been fortunate to have many mentors to nourish my imagination, mind and heart, shaping me not only into a better writer, but – I hope – into a better man. Over time, most of my favourite teachers became great friends. I suppress the memory of the rest, or channel them into literary villains. Curiously, there are no maths or PE teachers here tonight … but, of course, they too have souls! 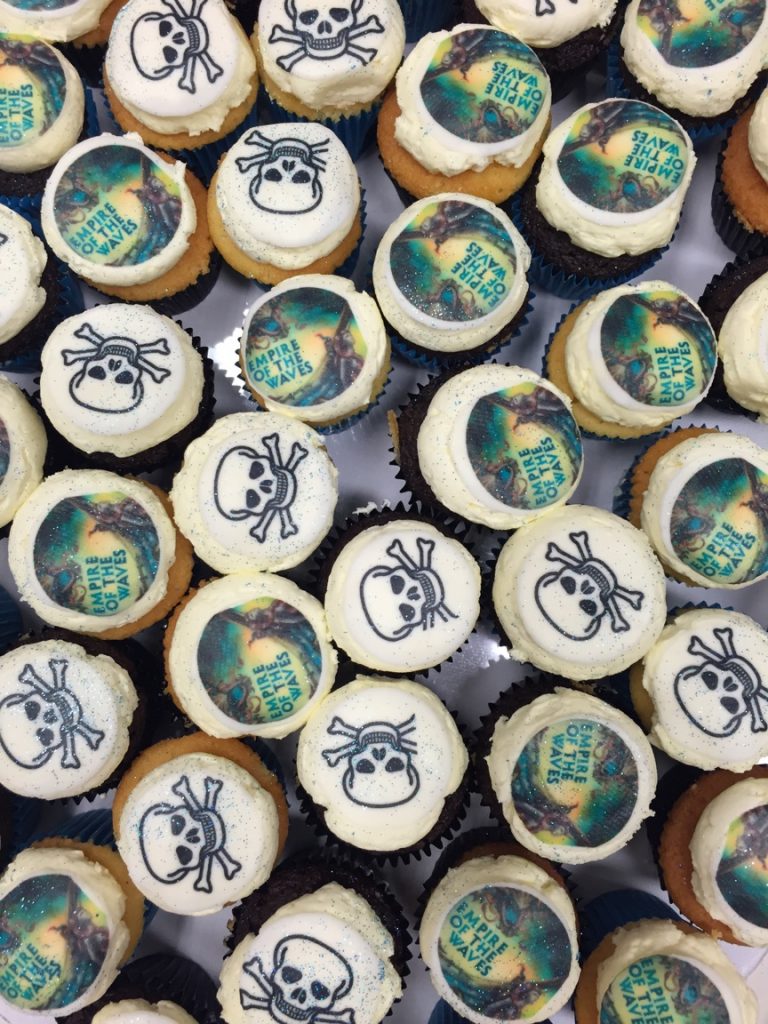 I particularly thank friends who have, over the last twelve years, listened patiently as I talked of Anni Tidechild, Duck Knifetooth, the felmane, sleen and wibbens, and most especially those who took the time to read and offer thoughts on early drafts. It’s a heavy burden indeed to read an unfinished novel…

I raise my glass to all of you, but also to absent friends, dearly missed, who could not be here tonight, yet sent notes of support in recent days – from Spain, England, Sweden, Holland, South Korea, and north of the Demilitarized Zone … in Queensland. One day, I pray, my friends north of the other Demilitarized Zone will be able to enjoy a moment such as this, freely sharing in the pleasures of the written word.

Above all, I thank my family, particularly my mother, father and sister, Katy. We have always been, and remain, a close family. Tonight I miss my dad the most – 5 years this September since he died, after a terrible battle with Parkinson’s overshadowing much of my Twenties. Stan was a prince among men. Along with my mother, he raised me with a heart full of stories, and I’m certain my love of the English language – its sound and rhythms especially – come from the nourishment of dad reading to me in childhood from Shakespeare and the King James Bible (still the two great wells of our language), and from my mother reading Tolkien and Lewis, Edward Lear, Lewis Carroll and Susan Cooper, before bed each night. Not to mention all the travel tales mum spun, of Indonesia, India, Africa and the former Soviet Union. They both set the bar high.

It’s my great sadness dad didn’t live to see me sign my contract with Penguin, and I confess I felt my own hope fading for a time. Of course, like all good dads, Stan knew the right thing to say to a son. Not long before he died, he told me that he knew it would happen some day, and if it didn’t, then he was proud of me all the same. One of the loveliest things Susie from Penguin ever said was that she felt his spirit filled the novel.

18 months after that great sorrow, as I prepared to embark on a new journey, starting my research on North Korean children’s culture, I received an email form Susie, Managing Editor at Penguin. Appropriately, given how I felt about life at the time, her first line was: “Are you still out there?” followed by a quip about a faulty TARDIS, which put me immediately at ease, as if there is one thing above all my childhood imagination loved, and inner-child still loves, it’s Doctor Who. 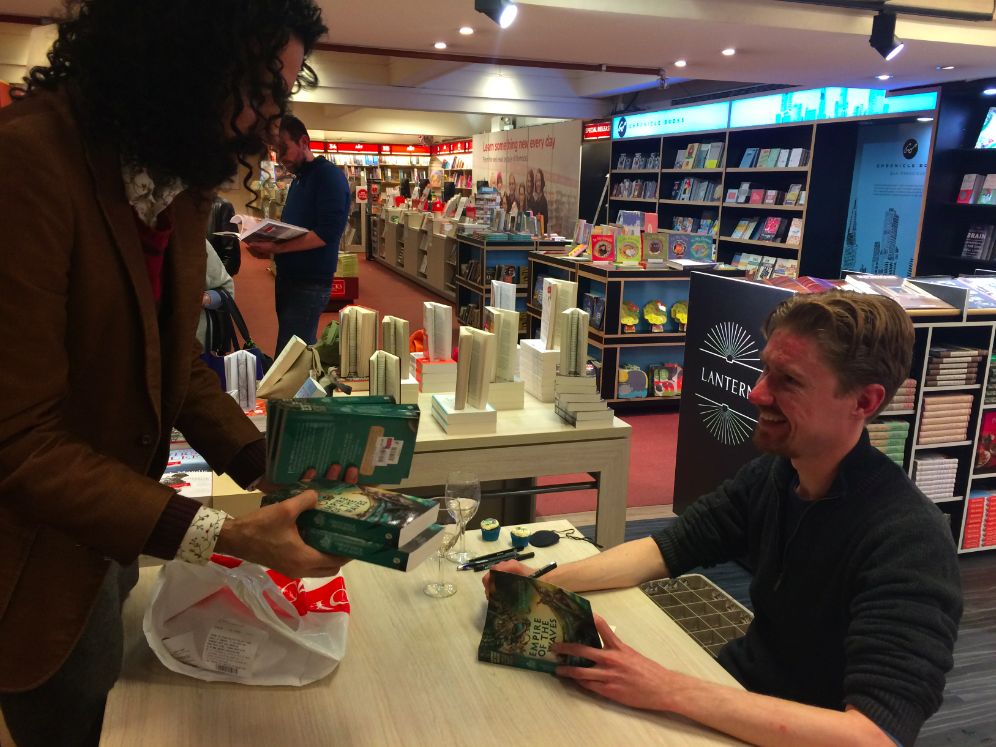 Thus began one of the busiest, maddest, most productive periods of my life, revising a then over 115,000-word novel … whilst researching and writing a 100,000-word thesis. In general, I don’t recommend this, but – happily – I had the best possible allies supporting me through my study – many of them here tonight – and in the House of Penguin.

Lisa Riley, a publisher of incredible leadership and vision, whose passion for Empire of the Waves guided me safely to this day. I cannot thank you more. Susie Gibson, who literally plucked my tale from the pile of unsolicited manuscripts, and whose correspondences over the last few years helped keep me on the straight and narrow with words and music to inspire, often when I needed them most. Alas, my first editor Davina Bell can’t be here tonight, but Davina left an indelible mark, and prepared the way for Jess Owen, who proved the best possible ally in the literary trenches. Jess is an extraordinarily gifted and hard-working editor. Thank you.

It’s no exaggeration to say I’ve enjoyed every moment working with these three here tonight, and – thanks to them – I think I finally know how to write a book.

I must also mention Bruno Herfst, designer extraordinaire. Bettina Guthridge, who took my scribblings and created the beautiful map of Salila. And Allen Douglas, whose magnificent illustration adorns the cover. Personally, I was must struck by the exquisite detail on Anni Tidechild’s face and the maw of the monstrous felmane, but no less a luminary than British comedian and novelist David Walliams has – among many many others – remarked upon the mermaid’s most notable assets. Which is fine, I guess, as I would like to think the novel contains something for everyone… 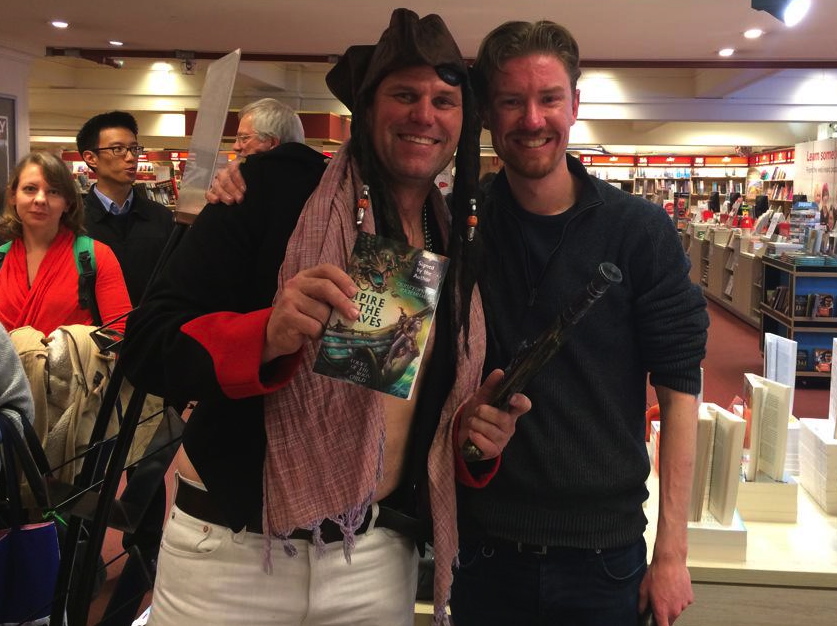 Mind you, when an eleven-year-old boy asked me at Berkelouw on Saturday what my book was about, and I replied: “pirates and monsters and sea creatures and mysteries of the deep … it’s got everything!” he immediately raised a brow, and asked: “But does it contain Norse gods?” Alas not, but since this was the same boy who also explained that his favourite thing about books is “burning them,” perhaps it’s safer to say the book has something for almost everyone.

If there’s anything I’ve learned writing a novel at the same time as researching the children’s culture of the DPRK – where every book, even for children, is either by or about the Great Leader, in one way or another, usually several – it’s that words have the power to liberate, or to chain us, according to how and why we use them. They can bind our hearts, but they can also set them free. For those of us who write for children, or teach, or are parents, grandparents, aunts or uncles, to children, it is especially true. What we say, what we write, and what we read matters.

That God should be defined both as logos, the Word, and also as love, has always resonated deeply for me. And to share words, to tell a story, to take that time out of a hectic day to share a tale between friends, between a parent and a child, between a writer and a reader, is – ultimately, I think – an act of love. For me, stories are the stuff the universe is made of. 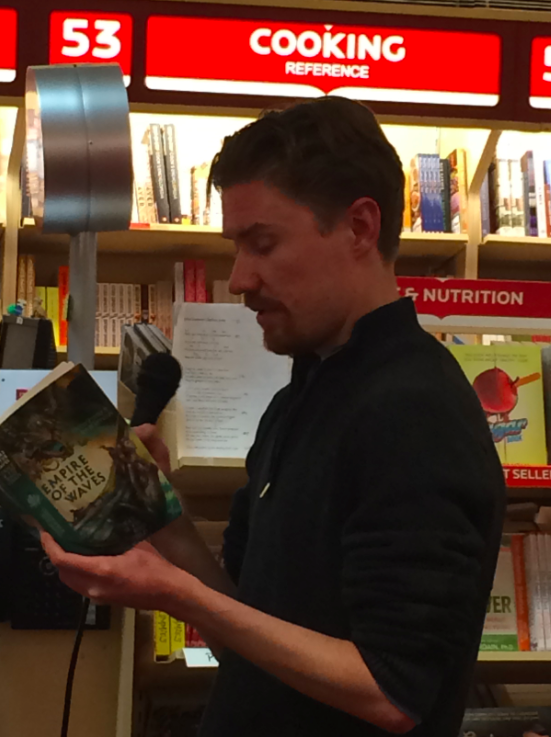 But, of course, as I writer, I would say that, wouldn’t I? So here I am, twelve years after that wintry day when I first imagined a small girl named Anni in peril, standing in the shadow of a giant ship, looking for answers.

Tagged with: Empire of the Waves, Launch