↓ Skip to Main Content
Home › Reviews of My Work

Reviews of My Work

Empire of the Waves: Voyage of the Moon Child

“[This] debut novel is an enchanting feat of the imagination. Filled with vivid creatures, vibrant settings and characters who always keep you guessing, the author seems to have thought of everything … This whirlwind adventure is sure to sweep the ground from beneath your feet.” Kayla Gaskell, ReadPlus

“This is a rollicking fantasy adventure that has wonderful characters and an intricately woven plot … Highly entertaining, will be enjoyed by lower secondary students with a taste for fantasy. Empire of the Waves has me eagerly awaiting the next installment of Anni and Duck’s adventures.” Michelle, Lamont Books

“This debut has all the elements of a great fantasy adventure – swashbuckling pirates, a friendly giant, wibbens (or dwarves), monsters of the deep, an underwater city and more … the story is beautifully written, action-packed and engaging … The conclusion leaves the reader wanting more from this exciting new fantasy series.” Angela Crocombe, Junior Books + Publishing 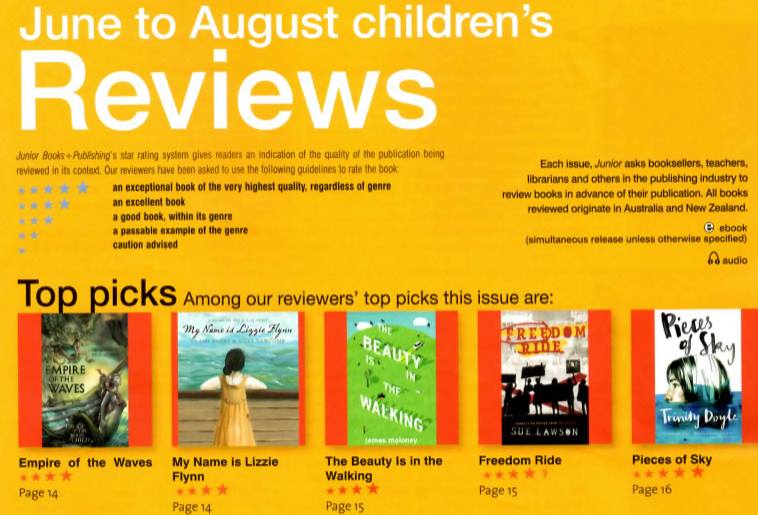 “Empire of the Waves instantly draws you in with its vivid descriptions…” Lisa Haynes, Creative Kids Tales

“This debut novel, ten years in the making, is a rich pudding of chaotic incidents, varied characters and exotic creatures. Anni and Duck are always in the thick of the action which gallops along at a fast pace occasionally leavened by moments of reflection … A fun read for those aged 10+ who enjoy lots of adventure.” Mia Macrossan, CBCA Reading Time

“A well-written and exciting adventure story that draws on classic fantasy and storytelling to create an in-depth world and characters that you won’t want to leave behind. It’s similar to series like His Dark Materials, Narnia, Harry Potter and Brotherband. What I especially liked about this were the strong female characters, which are hard to find in these sorts of kids’ books. I work in a bookstore and see firsthand how children’s books are very gendered — ie, ‘girly’ schoolgirl characters for girls and clever action heroes for boys, so it’s very refreshing when something like this comes along. Anni is a girl, but she’s tough and adventurous, so she would appeal as a lead to boys and girls, much like Lyra in Northern Lights. Duck, a boy she meets on her journey, is a nice foil to her and their friendship is compelling … a fun and thrilling novel for the 9 to 15-year-old market. Anyone with an adventurous spirit will appreciate it.” Stephie Colless, Manager of Harry Hartog Bondi Junction 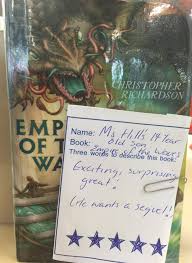 Spotted at a Teacher-Librarian Conference in Sydney!

“Empire of the Waves is so awe inspiring, enchanting, delightful and thrilling. Thank you for writing such brilliant escapism and rollicking fun!” Dr Hannah Ianniello

“Christopher Richardson did a great job of pulling you in and describing every situation in detail.” Emily, Year Eight, Young Adult Reader Reviews – Australia

“Empire of the Waves is a well-written, fantastic adventure and fantasy book that not just transcends the stereotypes of fantasy books, but augments the classic with the unique to create an amazing story with its own original plot and characters. The plot moves quickly; it’s fast-paced and dynamic, and is still able to have that in-depth detail and description. We get to visualise the world that Christopher Richardson has created, see what the characters see, feel what they feel, be a part of the story. It delves into mysteries and realistic ideas as well; it truly makes you think about the concepts of love, trust, loyalty and much more. This book was largely entertaining, and I couldn’t put it down after I started; I could really connect with Anni Tidechild, experience the frustrating walls she faced, and eventually overcome them, learning about the world and herself as well. I strongly recommend this to all who are interested in new, fresh, ingenious fantasy/adventure books that have that unthinkable twist in them that leaves you craving more. A definite must-read!” Jenny, Year Eight

“Anni Tidechild (orphaned and living in a library) isn’t like most characters I encounter in children’s books. She has fire in her belly (and fiery hair), and isn’t shy of fighting … Rich language throughout the book reminds me of far older books I read growing up … I can see links and influences to classic children’s books (with 2015 being the 150th anniversary of Alice in Wonderland, I think comparisons between the two will arise or even C.S. Lewis’ Narnia books), but like the teacher’s notes state it’s Philip Pullman’s Lyra Belacqua I’m reminded of. Could you imagine writing a children’s book and then being compared to Philip Pullman?! Amazing … I suspect this was not a book written purely for children originally, and this reason alone makes it rich and intriguing. With the Christmas and gift-giving season now behind us, I gifted this book to a couple of people, and they ranged between 10-40 years old. I’d recommend this book to confident Year 4 readers onwards (especially girls), but would encourage adults to have a flick too. And if you are a teacher of Years 5 & 6, the themes of this story fit nicely with the new history syllabus (in Australia). Here’s hoping Chris Richardson writes fast and completes series quicker then Isobelle Carmody. I don’t think I could wait that long for the rest of the series.” Rebecca Toltz, Teacher-Librarian, Kingsgrove Public School, Sydney 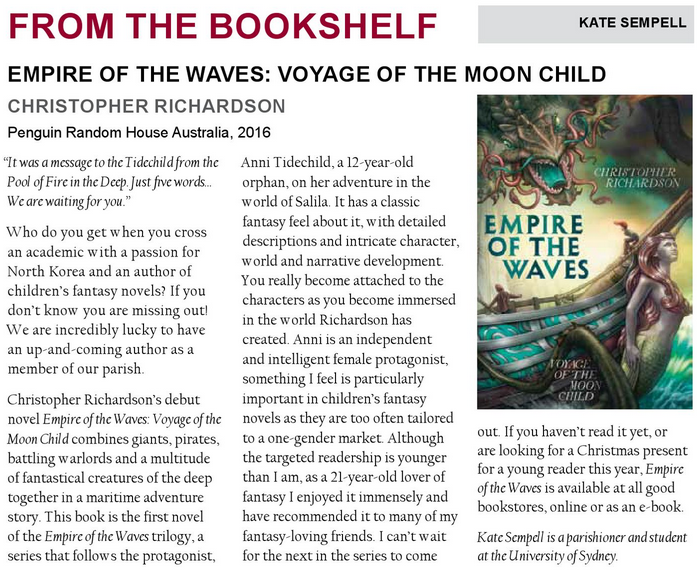 “Anni Tidechild on a quest to save her friends and her city – but what from? And can she tell the difference between her friends and her enemies? A journey of epic proportions and a fantastic read for lovers of fantasy,” Irina, Bookseller Shelf Talker, Dymocks Sydney