Note: This article is a brief overview of a wider research project I am undertaking on the life of Cyril Montague Birnie and the history of Australia-Japan relations. I welcome any contacts from those with direct or indirect knowledge of the life of C.M. Birnie.

In 1889, at the age of 21, Cyril Montague Birnie moved from Melbourne to Japan to help his uncle, Henry St. John Browne (from Launceston in Tasmania), manage a trading company in Nagasaki and Kobe. They were among a group of Western and Japanese entrepreneurs who helped build Kobe from the ground up, a Foreign Concession which rapidly grew into one of East Asia’s most cosmopolitan cities. 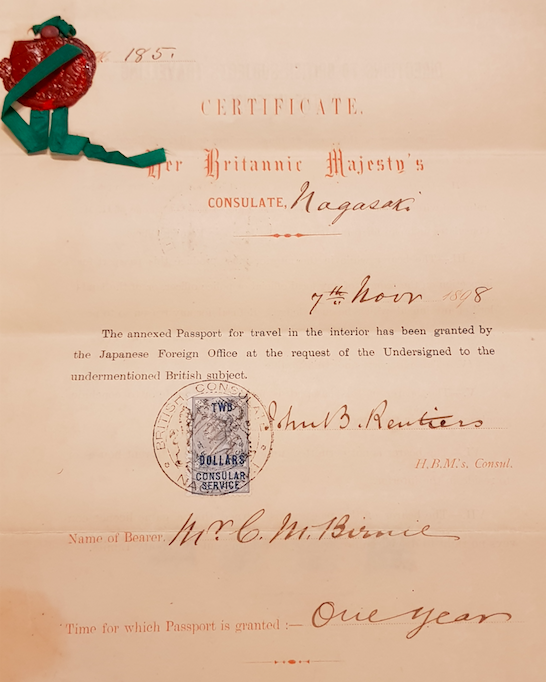 Deeply invested in the life of the city, Henry and Cyril helped establish the first international hospital in Kobe, and helped to develop the Kobe Regatta and Athletic Club – the oldest sporting club in Japan – which introduced football, rugby, hockey, cricket, bowling and rowing to the country. Later, a golf links would be built on Mount Rokko in Kobe, bringing the game to Japan. 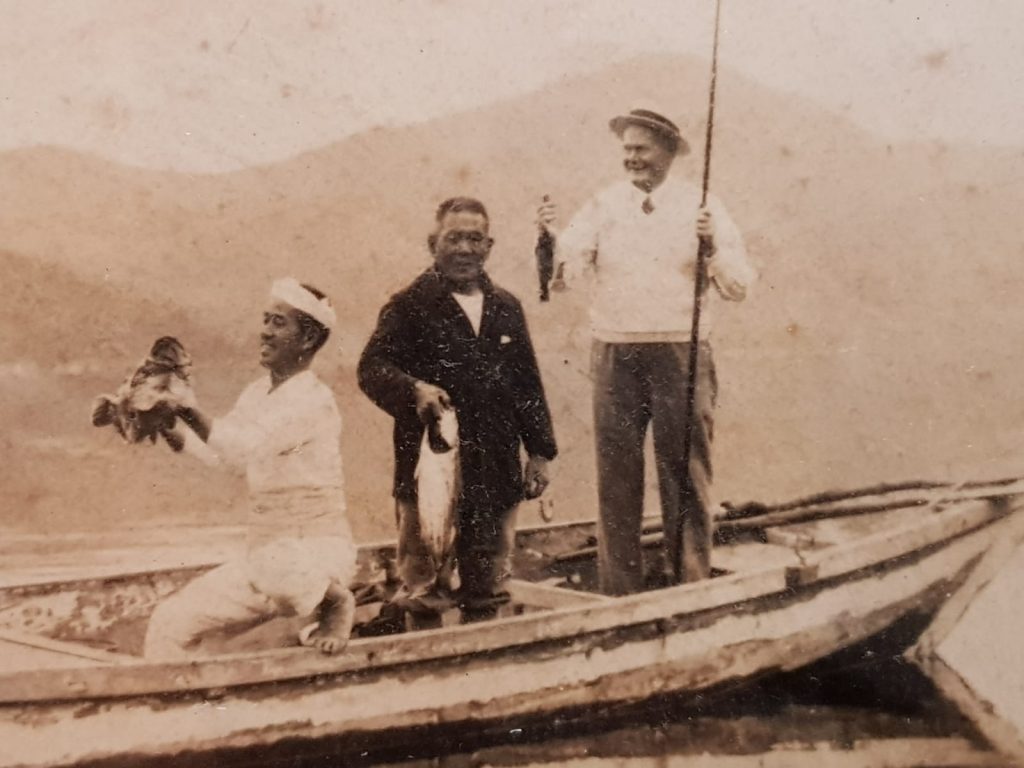 Fishing on Lake Ashi in Hakone

A mention of Birnie in the golfing pages of The Australasian in 1907 captures the culture of leisure among foreigners in Kobe at the time and also the peculiarities of one Australian’s first impressions of Japan. In a letter from Yokohama postmarked the 19th May 1907, a sojourning member of the Royal Melbourne Golf Club wrote:

[T]here is nothing very wonderful in Japan. One is a bit disappointed at the start, as the scenery is not what you are led to expect, but Japan grows on you, and the manners and the customs of the people are very interesting … you see very few beggars going about, and no loafers. The Japanese are workers and are a wonderful race – much behind in some things and far ahead of us in others, and always anxious to learn.

He was not, however, ambivalent about the Kobe Golf Club. As he goes on to explain:

What I particularly wanted to write about was the Kobe golf links … situated right on top of the mountains. The golf house stands 2,700 ft. above the city, and you walk up … [Y]ou get a most delicious hot bath, and after your round you want it … You play all along the top of the hills, driving across great ravines, with the course cut out between a tangle of bamboos … C.M. Birnie, an old Melbourne Grammarian, is a keen sport, and will always welcome golfers and give them a game. It was a great pleasure to meet him at Kobe and he gave me an awfully good time, so if any of the Royal Melbourne fellows come for a trip to Japan and go to Kobe, give them C.M. Birnie’s address and they will play on one of the most sporting, and – taking all matters into consideration – the most extraordinary links one would ever wish to play upon.

Meeting the Birnies became a rite of passage for Australian visitors to Kobe, but it was not all golf. After the Great Kantō Earthquake of 1923 (the greatest pre-war disaster to befall Japan), Cyril helped coordinate Australia’s aid response to the calamity. The quake struck two minutes before midday on the 1st September 1923. Over 100,000 would perish, the majority of casualties in Tokyo and Yokohama. Multiple aftershocks and a tsunami left more dead and wounded and over a million homeless. Firestorms raged across cities. Horrifically, scapegoats were soon found for post-quake lawlessness and looting, with Koreans accused of starting fires and poisoning the wells. In an article entitled “Poor Japan! An Australian’s Story: He Knew the Dead,” a Sydney journalist described meeting Birnie in the wake of the devastation:

When the Sydney Guardian saw Mr. Birnie, of Kobe, Japan, he asked that his name should not be mentioned. But he has done so much to try to aid the Japanese in their present anguish that his request has not been acceded to. A retired businessman, with interests in Japan, naturally hit hard by the earthquake and fire, he quietly communicated with the Federal authorities and offered his services, free, in the distribution of Australian relief for the sufferers. With no thought for himself, he made his plea. Australia, he thinks, should send blankets, and more blankets, then money, for food will be available, and the winter months are drawing near.

For half a century Birnie lived in Japan. There he married an English woman named Margaret Mary Dannatt and raised their two children. Cyril’s son, Eugene St. John “Bill” Birnie, would join the Indian Army, serve in the Third Afghan War, climb Mount Everest (yet fail to reach the summit), only to rise to become military secretary to Muhammed Ali Jinnah, first President of Pakistan. But that’s a story for another day. After Margaret’s death, Cyril Birnie would remarry and had another son in Japan, named Frederic, with Ellen Catherine (known as Nell). 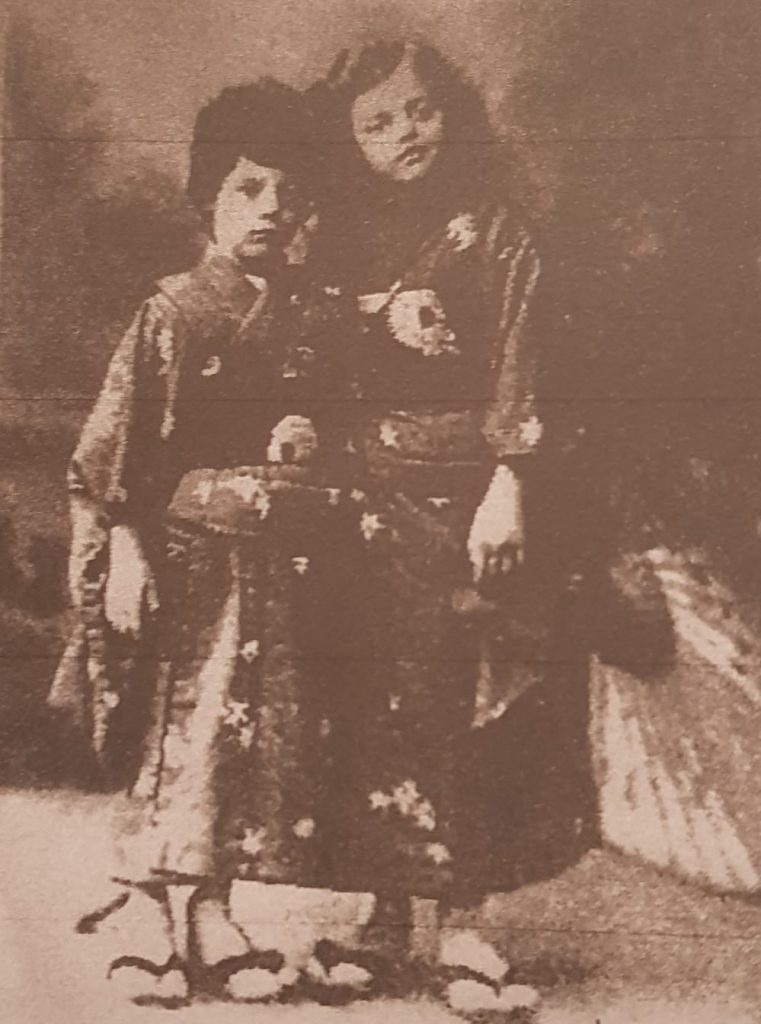 Everything changed after the Japanese attack on Pearl Harbor. Retired from Browne & Co., by 1941 Cyril Birnie and Nell lived in a lakeside home in Hakone (near Mount Fuji). 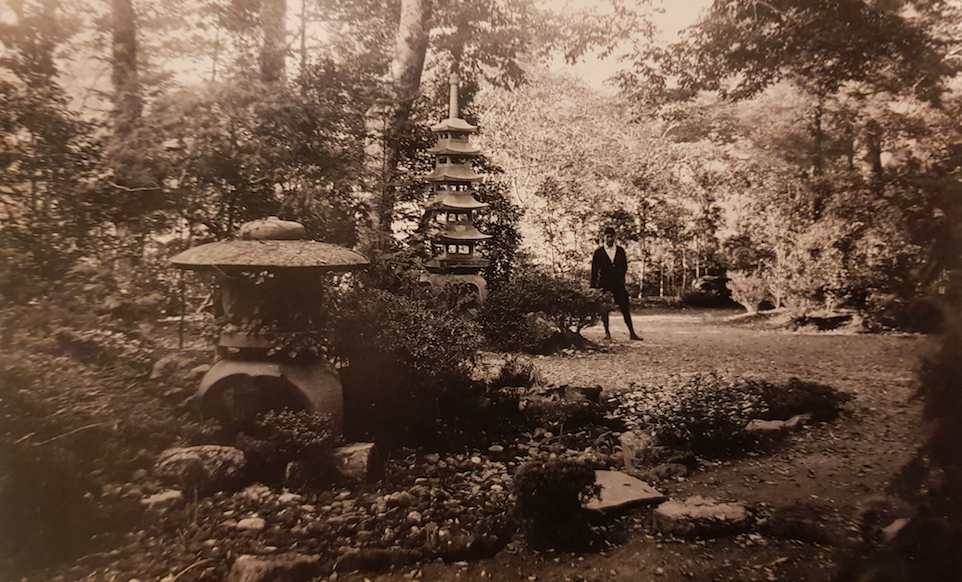 Cyril was then, above all, dedicated to the preservation of the local countryside from the ravages of rapid development and became a pioneer of conservation in Japan. Then came the Kempeitai. Birnie was arrested, kept in solitary confinement for three months in Yokohama by forces he later described as “the Gestapo”. His family’s properties and assets in Kobe and Hakone were seized by the Imperial Government, and Cyril’s lakeside home sold to a magnate from the Japanese railways. 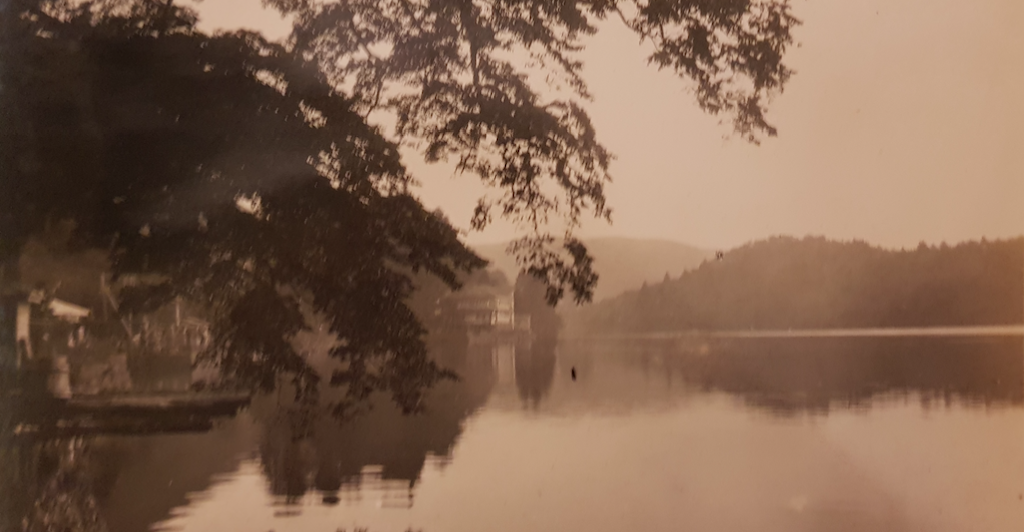 Then the seemingly impossible happened. Cyril became one of only two interned Australian civilians that the Japanese would exchange during World War II. Others had to wait until the war was over and many did not survive. As Professor Christina Twomey of Monash University elaborates in Australia’s Forgotten Prisoners: Civilians Interned by the Japanese in World War II:

The first and only exchange of civilians between Australia and Japan took place early in the Pacific War. The British and Japanese governments negotiated the agreement, to which Australia was party. Nationals of British and Allied countries resident in the Japanese empire, or in parts of China and Siam controlled by Japan, were exchanged for Japanese nationals from the British empire. The exchange occurred in Portuguese East Africa (Mozambique), at Lourenço Marques (Maputo), in August and September 1942 … Out of the total of 1800 Allied nationals who arrived at the port … a mere thirty were Australian … Several had been under house arrest, but only two of the repatriated Australians had been actually interned. The head of the Australian Presbyterian Mission in Korea, Dr. Charles McLaren, was one. The other was an elderly businessman, Cyril Birnie, who had spent more than fifty years in Japan and a few final months in a Yokohama prison … No further exchanges occurred despite extensive negotiations in the remaining years of the war. (36-37)

And so Cyril arrived home in Melbourne, having not lived there for 50 years. 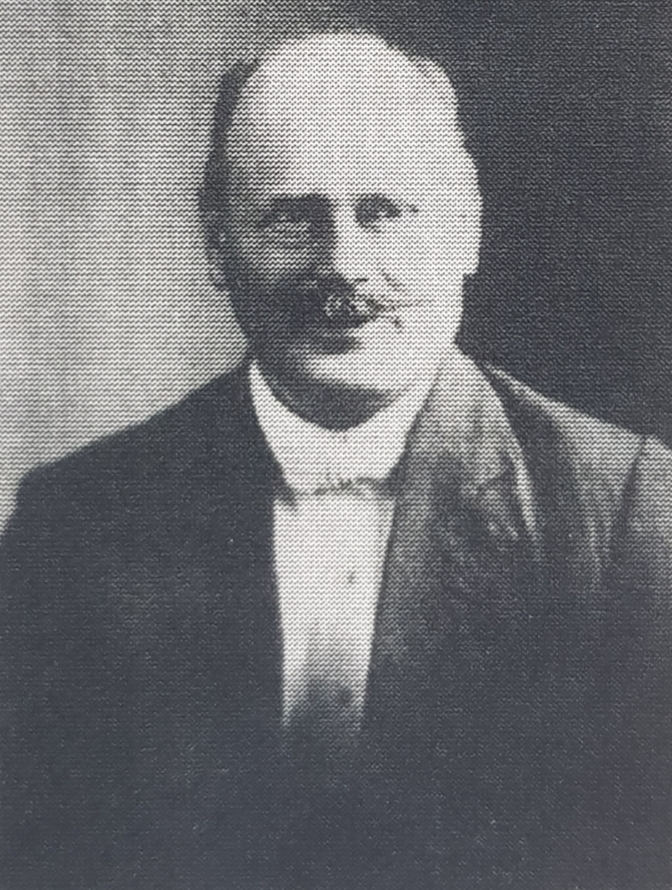 After the war, the Birnies returned to Japan. The properties in Kobe had been levelled by Allied bombing, yet the home in Hakone remained standing (having briefly housed US occupation forces). Cyril would remain in Japan until his death in 1958 and lies buried in Yokohama Foreigners Cemetery alongside his beloved wife. 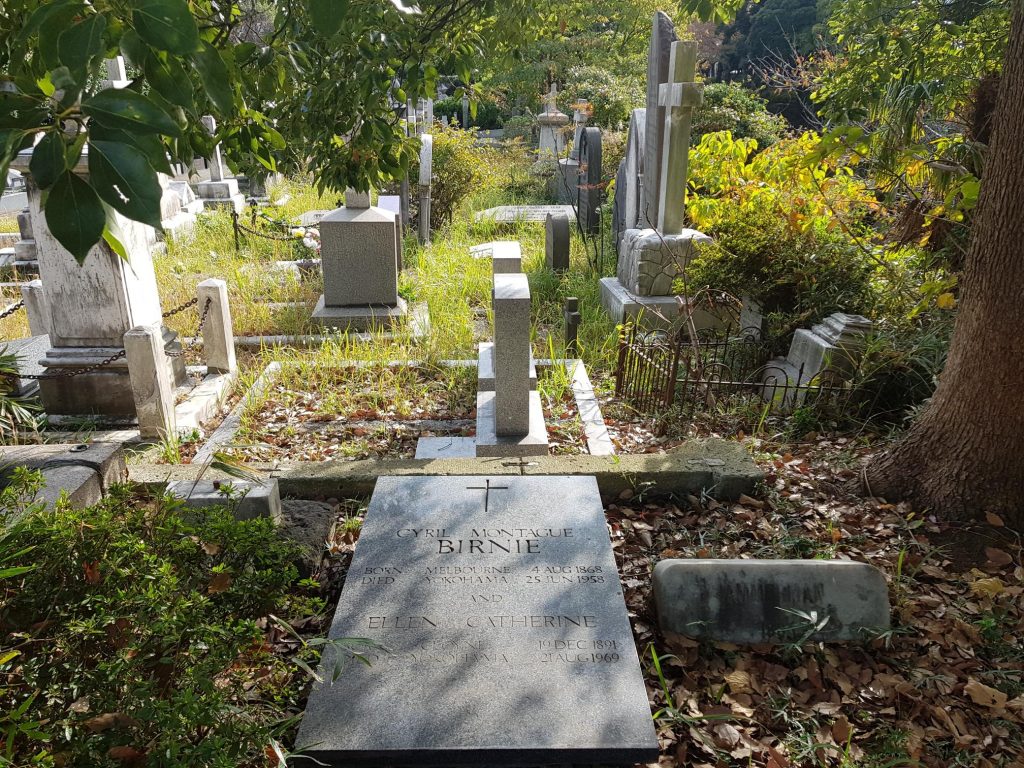 Today, there is an annual “Kaempfer and Birnie Festival” in Hakone each April to commemorate Birnie’s life and legacy as a conservationist. 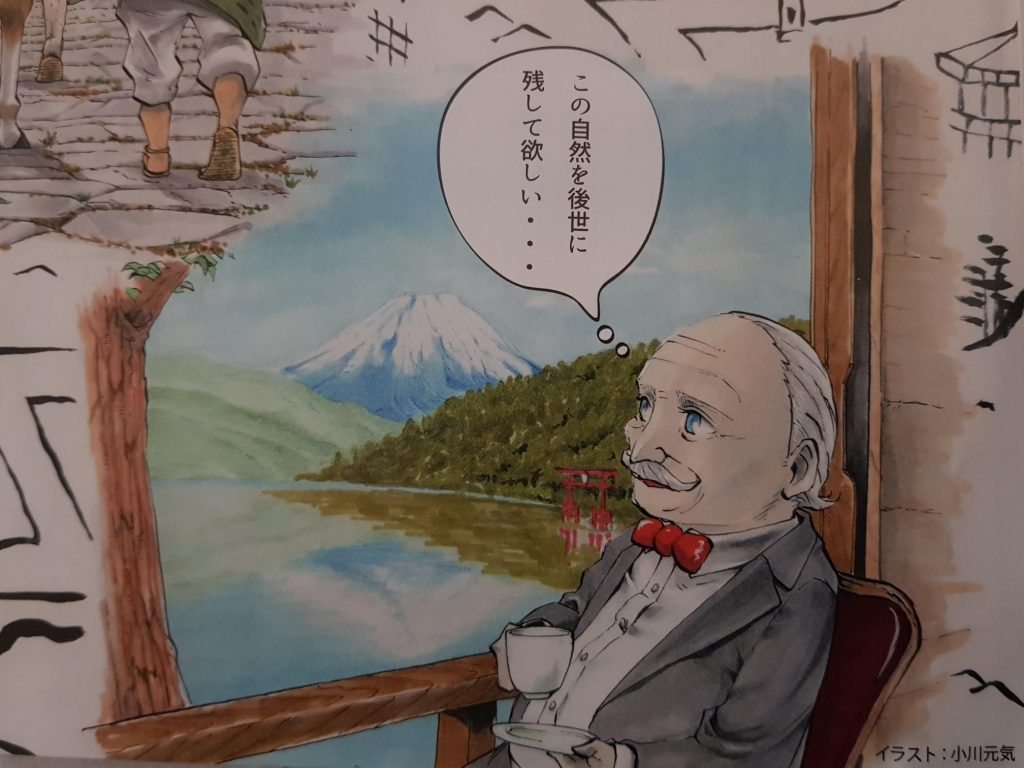 In his threnody for “Lost Japan”, Alex Kerr – a latterday Cyril Birnie – lamented that, “apart from showpieces such as Hakone Park, Japan’s countryside has been utterly defiled” (Kerr, Lost Japan, 46). To no small degree, the preservation of Hakone’s great natural beauty is a legacy of Cyril Birnie. 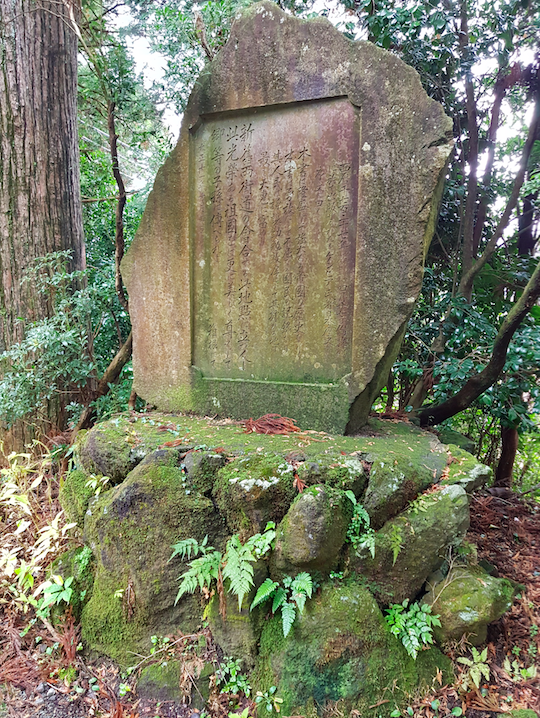 In 1922, Birnie raised this plaque along the Tokaido Road, exhorting the people of Hakone to preserve their natural environment.

Birnie’s long association with Japan, from 1889 to 1958 is not only the story of an incredible Australian life, but also the tale of Australia’s turbulent relations with Japan, from the opening of ties during the Meiji Restoration, to the darkest hours of the Pacific War, to the birth of a deep friendship in the postwar era that continues to this day. A legacy of peace. He was my great-great-grandmother’s brother. 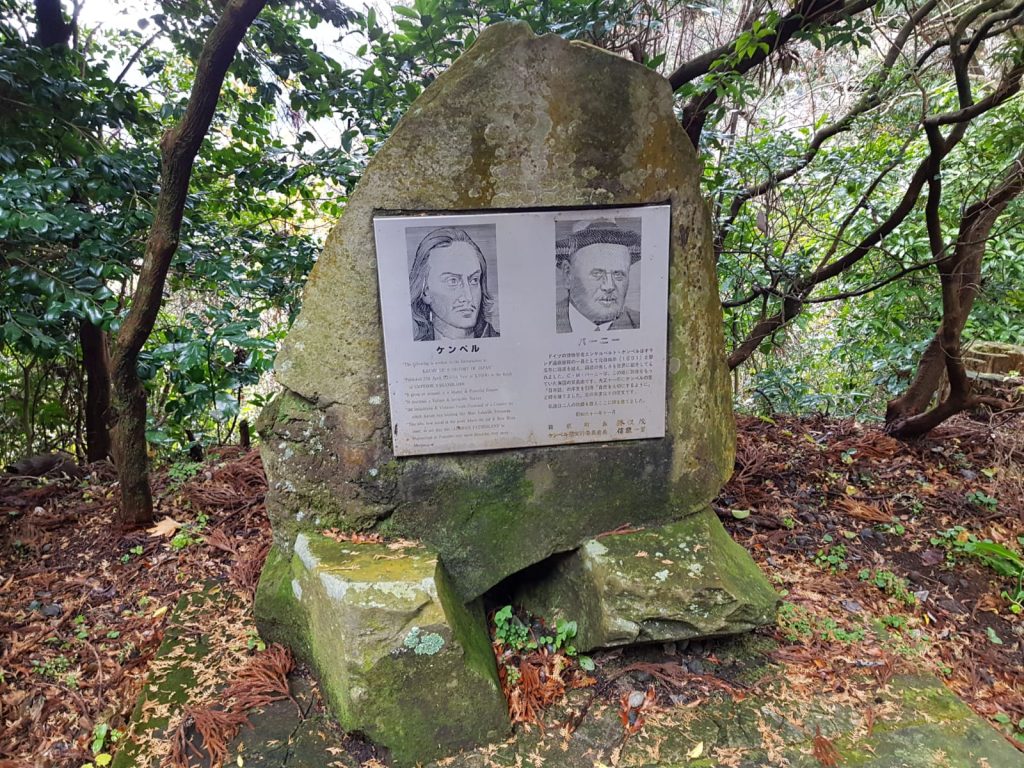 Memorial to Birnie in Hakone (right) and to Engelbert Kaempfer (left)

In November 2018, I made a trip to Hakone and spent a glorious long weekend with the Japanese men and women who keep the memory of Cyril Birnie alive. They continue to fight to preserve the natural beauty of the region and to safeguard it against the ravages of hasty development and environmental ruin. I will have more to say about them soon. For now I will conclude with Birnie’s  exhortation of 1922. In many ways, his words remain as relevant to Japan today, as they did almost a century ago:

“In the introduction to Kaempfer’s History of Japan, published in London the 27th April, 1727 (The 12th Year of Kyoho, in the reign of the Emperor Nakamikado), the following is written: ‘It gives an account of a Mighty and Powerful Empire. It describes a Valiant and Invincible Nation, an Industrious and Virtuous People, Possessed of a Country on which Nature hath lavished Her Most Valuable Treasures.’ You who now stand at the point where the Old and New Ways meet, so act that this Glorious Fatherland be transmitted to posterity ever more beautiful, ever more meritorious.”