1) When was Empire of the Waves: Voyage of the Moon Child released?

Empire of the Waves: Voyage of the Moon Child was released by Penguin Australia in July 2015, and is available from all good bookstores, as they say. Maybe some bad bookstores too.

2) How long did it take to write Empire of the Waves: Voyage of the Moon Child?

Let’s do some maths. Not something you’ll hear me say very often. I started work on Empire of the Waves in 2003 – on a bus trip from Thredbo, since you asked – which means I’ve spent more than a third of my life thinking and writing about Anni, Duck and Theodore. All up, it took approximately 12 years from my first inkling of an idea about the world of Salila until mid-2015, with the launch of the tale into the world.

3) What are you writing at the moment?

I’m working on a novel about North Korea. In a way, I’ve been researching and writing this since I started my thesis research back in 2012. Meanwhile, I have recently completed the first draft of a sci-fi novel set in a future Australia. Entitled Occupation Zone, this brain-searing thriller tackles many of the political, cultural and social questions that have troubled me of late.

Also in the works, a collection of poetry for children. Like Empire of the Waves, this is a decade in the making. My poems are very much in the tradition of Roald Dahl, Hilaire Belloc, Edward Lear and Lewis Carroll. Lots of nonsense, music, food and horrifying violence. You can read much of my poetry right here!

Please do! My email address is chris@christopherrichardson.com.au

5) Can you visit my school or library?

“Thank you very much for such a warm and enthusiastic talk to our students. The Year 8 students are already asking when can you speak to them! I loved the pirate clan workshop too…” Helen Lee, Teacher-Librarian, St George Girls High

For information, see Author Talks & Visits on my website.

6) Can I have your autograph?

Why, yes! E-mail me your contact details and I will send you a signed Empire of the Waves postcard with a personal note.

If you want a book signed, come along to meet me at an event! Or email me, and we can arrange something via mail.

No. I don’t. I handle all my own administration. However, the wonderful souls at The Children’s Bookshop Speakers’ Agency look after my many speaking engagements at schools, festivals and libraries.

8) Who are your favourite writers?

If had to pick a favourite novel, I would pick five: Gilead by Marilynne Robinson, Silence by Shusaku Endo, Zorba the Greek by Nikos Kazantzakis,  The Wind in the Willows by Kenneth Grahame and Les Misérables by Victor Hugo (not a fan of the musical, I’m afraid).

When I was a child, my favourite books were: The Dark Is Rising Sequence by Susan Cooper, The Earthsea Quartet by Ursula Le Guin, The Hitchhiker’s Guide to the Galaxy by Douglas Adams, The Hobbit by J.R.R. Tolkien, The Chronicles of Narnia by C.S. Lewis (especially The Voyage of the Dawn Treader), The Tripods Trilogy by John Christopher, Alice’s Adventures in Wonderland by Lewis Carroll, The Wind in the Willows by Kenneth Grahame, and pretty much every Doctor Who novelisation I could get my hands on. God bless you, Terrance Dicks!

9) What are your favourite films?

So many! In no particular order: Fanny and Alexander, Spirit of the Beehive, Alien, Aliens, Stalker, Amadeus, Apu Trilogy, Blade Runner, Tree of Life, Brazil, Lady Snowblood, Pan’s Labyrinth, Aguirre: The Wrath of God, Jackie Brown, Le Samourai, From Russia With Love, The Silence of the Lambs, Rear Window, Vertigo, Waiting For Guffman, Once Upon A Time In The West, The Good the Bad and the Ugly, Spirited Away, Mulholland Drive, The Last Temptation of Christ, Laputa: Castle In the Sky, 2001: A Space Odyssey, Sweet Country.

10) What are your favourite TV shows?

11) What is your advice to young and/or new writers?

Read widely, and not just in the genre or the style you wish to write. The best writers – like Philip Pullman or Ursula LeGuin – draw inspiration from wells both deep and distant. Read novels, poems, plays, essays, scriptures, songs, film scripts, diaries and words found scattered on life’s way. Read of history and science. Read books old and new and in translation. Learn another language, even just a little. Don’t apologise for books you haven’t read, they are undiscovered countries waiting to be found. Yet don’t be scared of daunting books. Reject age-banding and neat categorisations (of books and people), these are false idols that serve ideologies and marketeers, not readers.

Write often, but don’t punish yourself if life gets in the way. You don’t have to write everyday to be good. Some of the best writers in history had / have day jobs, families, friends, and all manner of responsibilities competing for their time. T.S. Eliot worked in a bank and was a genius.

Persist. All writers (published or otherwise) are survivors of often unbearable suffering at the hands of others (not to mention their own internal voice of doubt). My best friend once told me it was time to quit when it seemed Empire of the Waves might never be published. He meant well, but I’m glad I ignored him and persisted. He’s still my friend.

Take advice, but tread carefully. The problem with asking for the opinion of others, is that they will give it. One agent told me the first half of my novel was perfection, yet to scrap the second half. Another told me the second half was wonderful and to scrap the first. If had listened to them both, there would be no book at all. Conversely, I am cautious when asked for advice. One should never offer counsel just to seem like you have something worth saying. Find a small circle of confidantes who you trust to speak the truth with love. Yet still be prepared to ignore them and fight on.

Love well. It may or may not help your writing, but love will give you strength and make everything worthwhile.

I’ll give the last word to David Lynch…

Down deep, the fish are more powerful and more pure. They’re huge and abstract. And they’re very beautiful.” 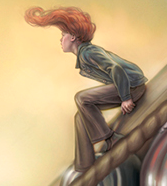